Coup attempts, even if they fail, as the events in Turkey since July 2016 have shown, can have a major impact on a country. And, as some of the reactions to the Turkey coup attempt have reiterated, they often seem to come as a surprise. We have created coup forecasts for 161 countries for 2017 that should make it more obvious and less surprising where any coup attempts that might happen this year will occur. Aside to presenting those forecasts, this post goes into a little bit more technical detail on how they were created.

First, this project is very much inspired by and in may ways a continuation of Jay Ulfelder’s coup forecasts for 2012-2015 (2012, 2013, 2014, 2015). It also draws on previous work Mike Ward, Cassy Dorff, and I have done on forecasting irregular leadership changes, which include coups, but also other mechanisms of sudden leader change.

END_OF_DOCUMENT_TOKEN_TO_BE_REPLACED

Over the past few months we have worked on regularly updating our irregular leadership change models and forecasts in order to provide monthly 6-month ahead forecasts of the probability of irregular leadership change in a large number of countries–but excluding the US–worldwide. Part of that effort has been the occasional glance back at our previous predictions, and particularly more in-depth examinations for notable cases that we missed or got right, to see whether we can improve our modeling as a result. This note is one of these glances back: a postmortem of our Yemen predictions for the first half of 2015.

To provide some background, the ILC forecasts are generated from an ensemble of seven thematic1 split-population duration models. For more details on how this works or what irregular leadership changes are and how we code them, take a look at our R&P paper or this longer arXiv writeup.

We made a couple of changes this year, notably adding data for the 1990’s, which in turn cascaded into more changes because of the variation in ICEWS event data volume. This delayed things a bit, but eventually we were able to generate new forecasts for the time period from January to June 2015, using data up to December 2014. Here were the top predictions:

END_OF_DOCUMENT_TOKEN_TO_BE_REPLACED

or, How I learned to stop worrying and love event data.

Nobody in their right mind would think that the chances of civil war in Denmark and Mauritania are the same. One is a well-established democracy with a GDP of $38,000 per person and which ranks in the top 10 by Human Development Index (HDI), while the other is a fledgling republic in which the current President gained power through a military coup, with a GDP of $2,000 per person and near the bottom of the HDI rankings. A lot of existing models of civil war do a good job at separating such countries on the basis of structural factors like those in this example: regime type, wealth, ethnic diversity, military spending. Ditto for similar structural models of other expressions of political conflict, like coups and insurgencies. What they fail to do well is to predict the timing of civil wars, insurgencies, etc. in places like Mauritania that we know are at risk because of their structural characteristics. And this gets worse as you leave the conventional country-year paradigm and try to predict over shorter time periods.

The reason for this is obvious when you consider the underlying variance structure. First, to predict something that changes, say dissident-government conflict, the nature of relationships between political parties, or political conflict, you need predictors that change.

Predictions for regime change in Thailand from a model based on reports of government-dissident interactions (top). White noise, with intrinsically high variance, is not helpful (middle), but neither is GDP per capita (bottom).

END_OF_DOCUMENT_TOKEN_TO_BE_REPLACED 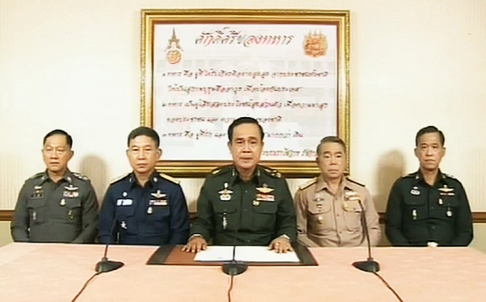 END_OF_DOCUMENT_TOKEN_TO_BE_REPLACED

Gilbert F. White was a giant in the field of natural hazards, and a former colleague in Boulder at the University of Colorado, where he was an early director (beginning in 1970) of the Institute of Behavioral Science. Decades before that he had written his dissertation about how humans dealt with floods and his work led to the establishment in the early 1950s of a Federal framework that graded the probability of floods. Now it is easy to ascertain the 100-year flood plain for any locale in the United States, since by law this is required of city and state planners. The city to which he moved, and in which we were colleagues, has it’s own connection to the subject of his research, as Boulder experienced a massive flood that devastated the city about a century ago.

The Boulder flood plain for 100 and 500-year floods developed in part as a result of White’s activism in planning for floods. Gilbert White’s office was just outside of the flood plain, up on a hill, overlooking it–near where I am temporarily sitting at this instance. But his last house in Boulder was not. And, anyone who followed the news this fall of the floods in Boulder–which were considered by many to be of the 100-year variety, may not know that Gilbert White’s advice probably saved many lives, as he argued for structures to be built that could interact with floods in a way to diminish risk (i.e., breakaway bridges, et cetera). Gil was famous for many things, including the quote “Floods are `acts of God’ but flood losses are largely acts of man,” which was taken from his dissertation. In the 1980s he convinced the Boulder City Council that Boulder had previously experienced a flood even larger than the huge flood of 1894. As a result building in the flood plain was restricted (a bit) and knockout bridges were built. I remember reading an article when I arrived in Boulder in the early 1980s about Gilbert’s warnings about a 100-year flood, which pictured Gilbert then in his 70s standing in the rushing Boulder Creek. You can listen to Gilbert discussing this issue as well as see a version of the Boulder floodplain.

END_OF_DOCUMENT_TOKEN_TO_BE_REPLACED

ICEWS is an early warning system designed to help US policy analysts predict a variety of international crises. This project was created at the Defense Advanced Research Projects Agency in 2007, but has since been funded (through 2013) by the Office of Naval Research. ICEWS has not been widely written about, in part because of its operational nature, and in part because articles about prediction in politics face special hurdles in the publication process. An academic article (gated) described the early phase of the project in 2010, including assessments of its accuracy, and a WIRED article in 2011 criticized ICEWS for missing the Arab Spring–at a time when the project was only focused on Asia.

In an article (here for now) forthcoming in the International Studies Review, as one of the original teams on the ICEWS project, we highlight the basic framework used in the more recent, worldwide version of ICEWS. Specifically, we discuss our model that is focused on forecasting, which is our main contribution to the larger, overall project. We call this CRISP. We argue that forecasting not only increases the dialogue between academia and the policy community, but that it also provides a gold standard for evaluating the empirical content of models. Thus, this gold standard improves not only the dialogue, but actually augments the science itself. In an earlier article in Foreign Policy, with Nils Metternich, we compared Billy Beane and Lewis Frye Richardson (sort of). 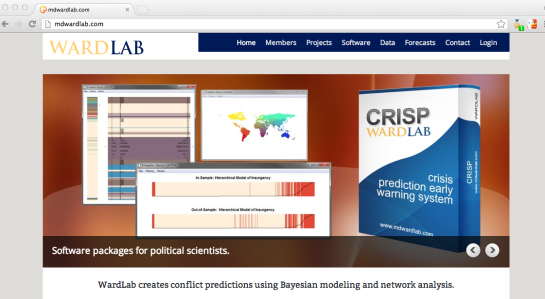