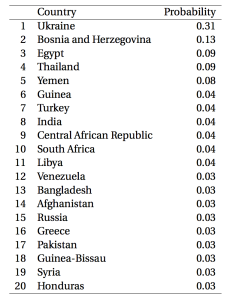 Forecasts for Irregular Regime Change between April and September 2014, using data and models through March 2014.

One of the things we argue in the report is that rather than looking at coups, successful protest movements, and armed rebellions as separate phenomena because the mechanism by which they effect regime changes is different, we should look at the common outcome they lead to, which we call irregular regime changes. This concept builds on the Archigos dataset on political leaders, which codes how leaders enter and leave office, and considers this transition process to be irregular in cases where it contravenes the established rules and conventions of a state. Irregular regime changes by our definition thus occur when a leader enters or leaves power through irregular means, whether this is brought about by a coup, mass protests, armed rebellion, or any other mechanism.

The usefulness of this concept comes out clearly in the events that have occurred in Thailand over the past few months. What happened today was without question a military coup. But if we look at the larger context, the previous Prime Minister,  Yingluck Shinawatra, was forced to resign office after a ruling from the Constitutional Court on May 7th, and both this ouster and the subsequent military coup occurred after six months of escalating pro- and anti-government protests. We’ve blogged before about anti-government networks in Thailand and the role these play in protests, summarizing work in a recent AJPS article. It seems that in the current round of protests, the actions of protesters and the government were in fact shaped by beliefs about the threat of a military coup. As far back as December, protest leaders appealed to the military to intervene and depose the civilian government, and it seems that the response by government police forces from the beginning of protests has been shaped, at least in part, by concerns about avoiding military intervention.

This raises the question of whether we should consider the events in Thailand to be a classical military coup or a successful protest campaign, or both. Even more so since this is not the first coup staged in the shadow of mass protests (e.g. Egypt 2013), and considering that any successful protest campaign must have at least the acquiescence of the military. For the latter, look at the difference in outcomes for the protest campaigns in Egypt in 2011, where the military was relatively constrained and neutral, and Bahrain in the same year, where the military and police have brutally suppressed dissent. Rather than attempt to separate these messy and intertwined mechanisms, we argue that it is helpful to focus on the common outcome of irregular regime change.

Obviously by focusing on a broader outcome, we step into a world of multiple, different mechanisms that can lead to our outcome of interest. To that end, our forecasts actually come from an ensemble model that combines seven different split-population duration models, which distinctly model the risk that a country will experience and event at all, as well as the particular timing of an event given that a country is at risk. We call these seven sub-models thematic models, in the sense that each is meant to capture a difference facet of IRC, i.e. by focusing more on conditions amenable to coups or protest campaigns, or by focusing on a different functional process, like contagion of dissent from neighboring areas or economic instability. The predictions from these seven models are then combined into an ensemble model using…wait for it…Ensemble Bayesian Model Averaging (EBMA, gated article), which weights the input model predictions by factors related to their overall accuracy but also their uniqueness.

All of this makes makes for a complicated research design. To help with the interpretation of models, we included a graphic that shows how the conditional risk probability, which estimates the chances that a country will experience an event at all, and the conditional hazard rate, which estimates the probability of an event at a given time, given the chances that the country is in the risk set. The particular example shows the conditional hazard and risk for the “Chatter” thematic model, which is based on cell phone and broadband access rates alongside with indicators of the reported (lately, but also earlier) level of verbal intra-government cooperation and verbal dissident-government conflict (from the ICEWS event data). Coincidentally our example was for Thailand.

The figure shows that Thailand is estimated to be in the risk set over our entire coverage period, although for other cases risk estimates are usually less extreme and vary somewhat over time. But if we look at the conditional hazard, which is informed by predictors like the count of reported verbal intra-government cooperation that vary quite a bit over time, we can see that the probabilities fluctuate quite a bit month to month. We’ve marked the IRC that occurred in 2006, three months after a spike in hazard prediction. The last data point is for March 2014, and we can see an increase in the model predictions around that time.

In any case, the political unrest in Thailand, and the accompanying economic consequences, as well as similar issues in places like the Ukraine, which will have a presidential election next week, are without a question undesirable. But it is mildly reassuring that we seem to be getting better at predicting and anticipating them.